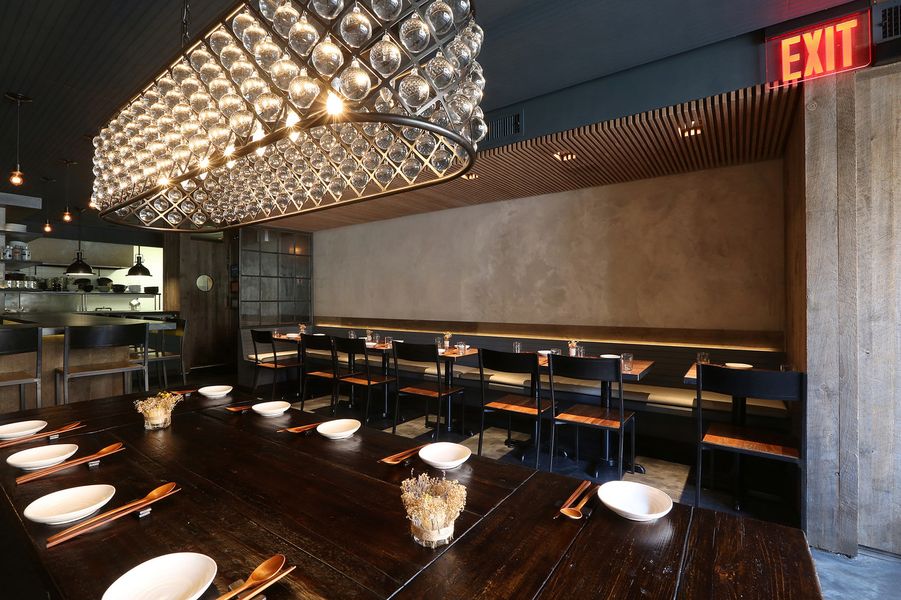 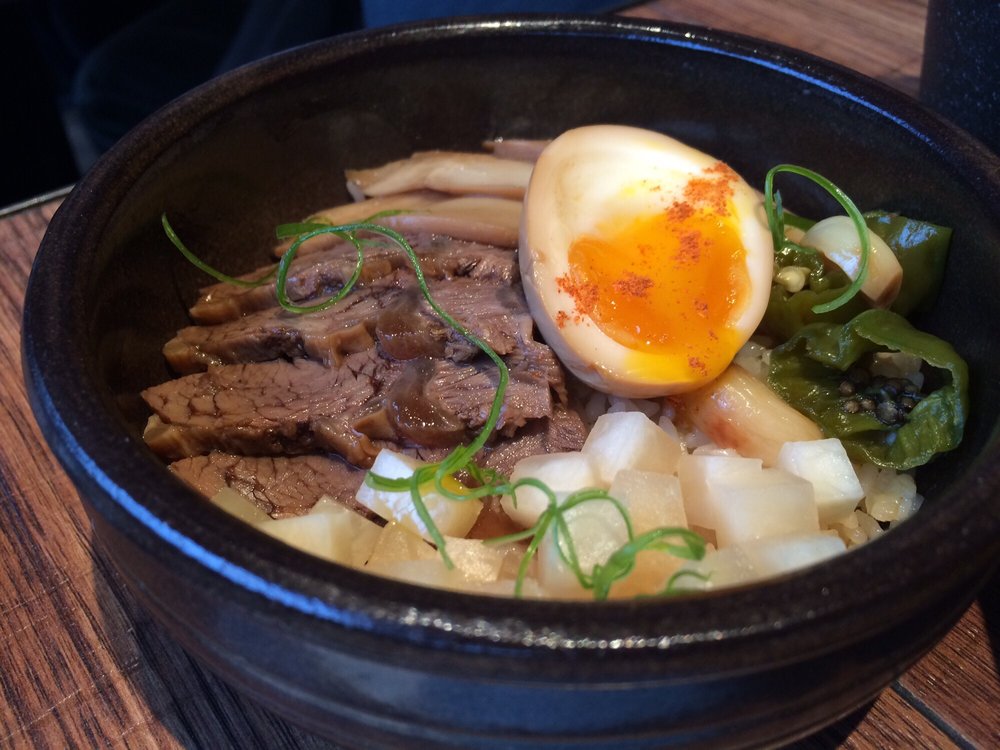 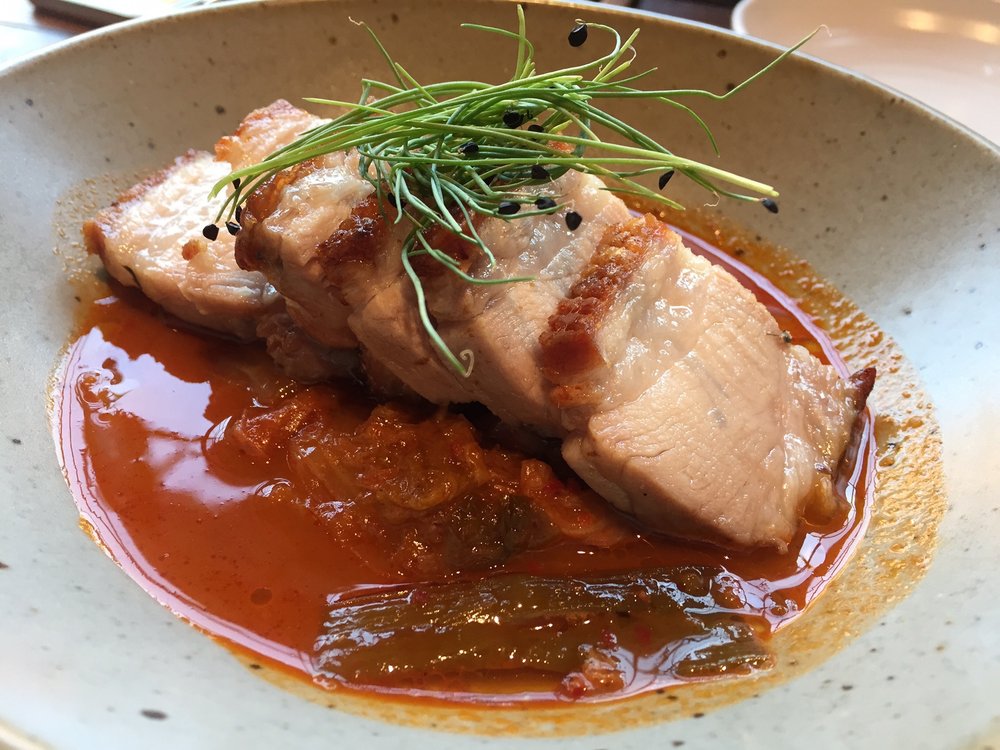 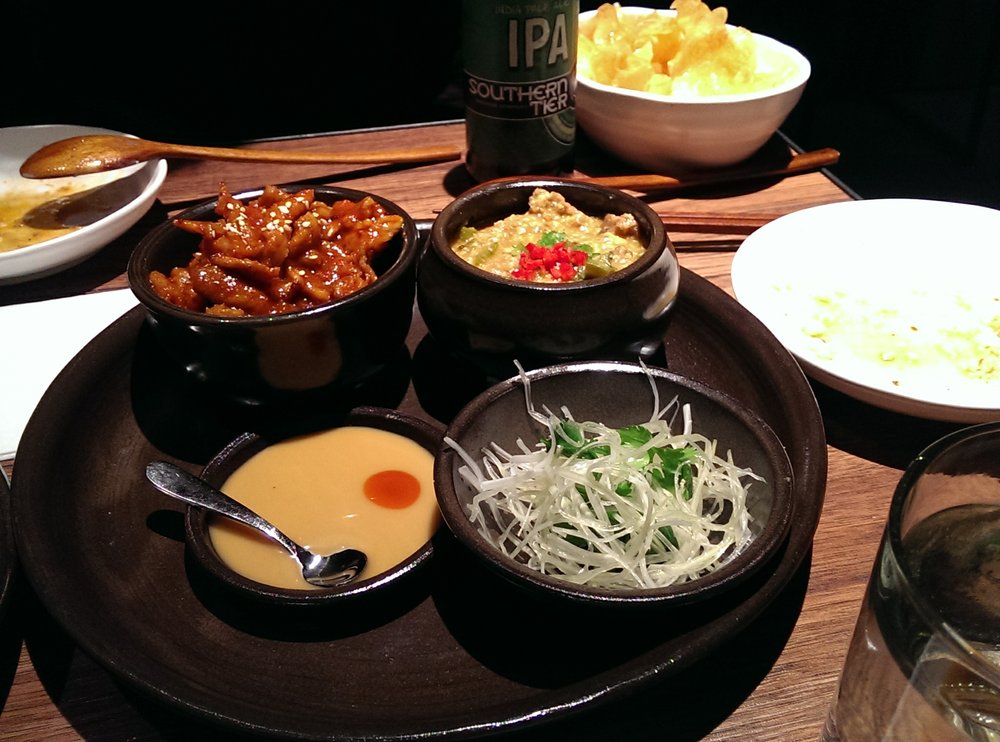 Ojii, is a very popular new “modern” Korean restaurant in the East Village.  It’s a nice new take on Korean food with a certain spark of composed elegance.

Oiji is creating a new category for Korean cuisine in New York City: Refined Authentic Korean. Exploring traditional flavors and dishes while utilizing modern cooking techniques and ingredients, artful plating and portion sizes. The menu ranges from the Jang-jo-rim, which is practically buttered rice with beef and egg, to the Truffle Seafood Broth with Crispy Rice. Plus the fried chicken is decked by tapioca flour, so no crusty Southern version there. Also—a beef tartare of intricate shape, and other delicacies.

Here, the flavors of bibimbop appear in something called chil-jeol-pan seven flavors, a dish with a stack of rice flour crepes and a plate of toppings that include eggs, beef, shitake mushrooms, carrots, and cucumbers. It’s a sort of DIY dinner, where diners can make rolls from the crepes. There’s also a ssam platter for two, and a Korean-influenced drink list that includes plum wine, rare soju, and rice wine.

There’s just one dessert here, a gourmet version of the cult Korean snack honey butter chips, which is quickly becoming one of the hottest dishes of the summer.

Oiji offers a Korean dining experience that is at once familiar and surprising, in a modern downtown setting. The intimate but stylish restaurant is accented with an open kitchen, reclaimed wood, exposed brick and ambient lighting with factory sash windows that open out to the bustling streets of downtown Manhattan.

The upscale experience lies in excellent pieces such as smoked mackerel with citrus soy to be brushed onto it with a special pine needle brush. Next—oxtail, then the seven flavors of “Chil-jeol-pan” tiny crepes—and you’re hooked.

The intimate dining room is small and moodily lit, with an open kitchen that allows diners to see and hear the action as it takes place.

The uncluttered space has seating for just shy of 40, including around a large shared table. There’s a huge chandelier, and some tiny flowers on the tables, but otherwise this is a spare, simple place.

Heart and Soul of Oiji

Headed by a duo of young Korean-born chefs who met at the Culinary Institute of America and put their education to work in the stellar kitchens of Bouley and Gramercy Tavern.

The heart and soul of Oiji is the co-chef/co-owner team of Brian Kim and Tae Kyung Ku. Born and raised in Korea, both worked in restaurants in Seoul before moving to the United States to attend the Culinary Institute of America. As roommates they quickly became friends, and soon realized a shared vision upon graduation: to bring a new perspective on Korean cooking to New York City. Kim and Ku cooked at Bouley and Gramercy Tavern, respectively, before embarking on their journey to create Oiji, offering a unique menu meant for sampling and sharing.

Oiji is the kind of place that will have you thinking about what to drink that will pair well with your meal, not because you are a wine snob, but because the food here is so interesting and delicate and carefully prepared that an OB would seem inadequate for the occasion. 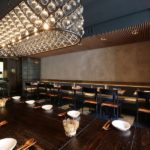 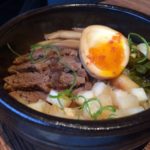 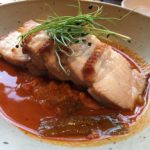 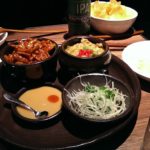