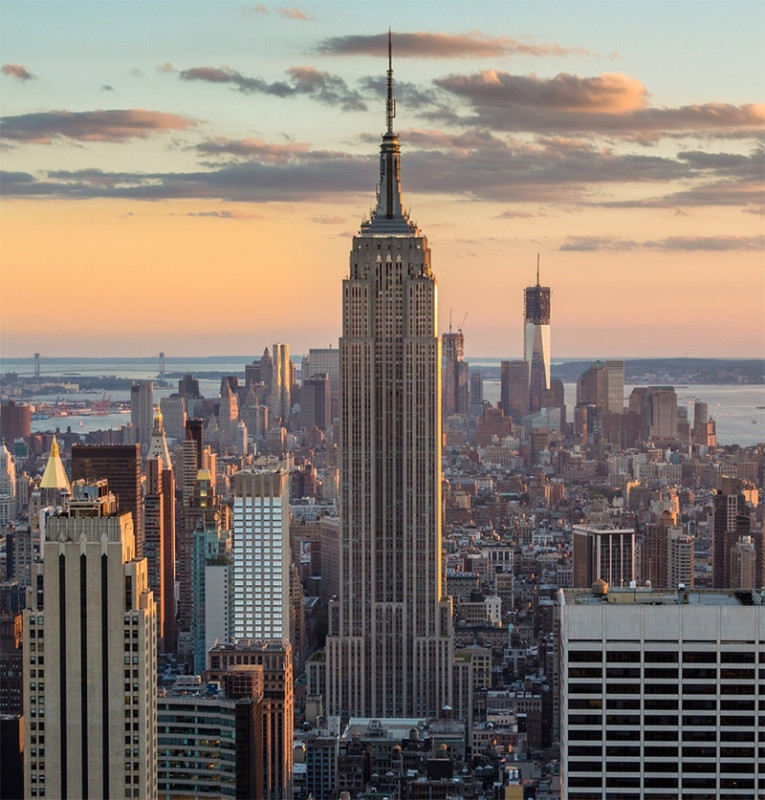 There are many tall buildings in New York, but only one Heart of NYC: The Empire State Building. Take in New York’s most breathtaking views from its highest open-air observatory. Learn the fascinating history of the building’s construction, restoration and industry-leading sustainability retrofit. Dive deeper with a complimentary interactive audio tour, which includes detailed narration of the view in every direction. And since the City never sleeps, the Empire State Building prides itself in staying open late. See New York’s world-famous skyline as it was meant to be seen. Elevators run until 1:15am every night.

The Empire State Building is a 102-story skyscraper located in Midtown Manhattan, New York City, on Fifth Avenue between West 33rd and 34th Streets. It has a roof height of 1,250 feet (381 m), and with its antenna spire included, it stands a total of 1,454 feet (443 m) high. Its name is derived from the nickname for New York, the Empire State. It stood as the world’s tallest building for nearly 40 years, from its completion in early 1931 until the topping out of the original World Trade Center’s North Tower in late 1970. Following the September 11 attacks in 2001, the Empire State Building was again the tallest building in New York, until One World Trade Center reached a greater height in April 2012. The Empire State Building is currently the fifth-tallest completed skyscraper in the United States and the 29th-tallest in the world. It is also the fifth-tallest freestanding structure in the Americas. When measured by pinnacle height, it is the fourth-tallest building in the United States.

The Empire State Building is more than just a view. It’s an immersive experience inside a world famous landmark. In addition to our Observation Decks, your visit includes the newly restored lobby with its stunning Art Deco ceiling murals, the historical Dare To Dream Exhibit, the new Sustainability Exhibit, and an interactive audio device.

Get a sneak peak of everything the Empire State Building Experience offers with this virtual video tour. The tour walks you through the whole experience, from the newly renovated art-deco lobby through the sustainability and historical exhibits, up to our observatories. See for yourself what makes the Empire State Building Experience a must-see on your next NYC visit.